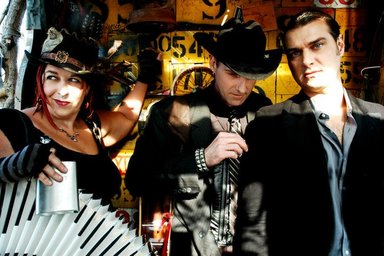 Rhubarb Whiskey was formed in April 2008, by Emchy (vocals, accordion) and Boylamayka Sazerac (vocals, bass, guitar). In June 2010, they added Sizzle le Fey on fiddle. They have become known in the Bay Area and beyond as a group of hard-drinking troubadours who sing death songs and murder ballads right alongside anthemic adventure tales and tender tunes about love. In look and sound, they evoke sleazy San Francisco punk rock clubs and Weimar cabarets just as much as they evoke the ghost towns and saloons of the Wild West. On January 23rd, their second full-length album, Same Sad End, will be available for purchase at rhubarbwhiskey.bandcamp.com.

Their music has been referred to as the anti-prohibition, hellbilly goth, the bluegrass Dresden Dolls, and the fortunate love child of Bill Monroe and Sid Vicious. Bringing you atmospheric, literate, romantic drinking songs that are sexy, rugged and furiously alive this murder ballad americana band is here to charm you with their tales of love, friendship and the devils in the bottle.

Their newest effort, Same Sad End,  is an album of dichotomies. It is the glint of a switchblade held to your throat; it is the friend whose flask is always full and whose shoulder is always there to cry on. It puts new spins on old songs, and makes new songs sound timeless. From the sad and beautiful title track, Same Sad End (with guest vocals by Carolyn Mark) to the rowdiest, most foot-stompin’ version of St. James Infirmary Blues you ever heard, this album has it all - dark, sexy killing songs (Gravedigger), boozy ballads (Mendocino), off-kilter anthems to drinking with pals (Bottles), blues-grass with a danceable groove (Knock ‘Em Down), and country weepers (My Rifle, My Pony, and Me; Ella). It will break your heart and heal it all over again - and you’ll love every minute of it.


For photos, interviews, rhubarb whiskey recipes (yes it is a drink too) and other ephemera please contact emchy at 415-350-7387 or via email rhubarbwhiskey@gmail.com


Enjoy the mandolin, accordion, fiddle, violin, guitar and other olde tymey folk and newgrass sounds of Rhubarb Whiskey. Rowdy ragtag dust and tumble folks who know a good time when they're playing it at a campfire.